The mortgage lending industry is constantly changing. With that in mind, we provide an outlet covering strategic and operational issues relevant to mortgage lenders. Our insights are obtained through hands-on work with clients and vendors.

Our promise – no marketing, no BS, just mortgage shop talk for mortgage lenders.

Given your zest to hit the door for the long, three-day weekend, it’s possible you missed the freshly released MBA stats for Q4 2017. Total production volume took its customary Q4 dip with slightly less purchase volume than in Q3 with total market estimates of roughly 63% purchase volume.

As usual, Q4 volume was seasonally light, but as you can see from the chart below, costs were still high even compared to prior Q4 totals. On top of the high cost to originate, net profit per loan seriously tanked in Q4 to $237 per loan from $929 in the prior quarter. One slight positive is the pull-through rate (closings per applications) ticked higher to 76% in Q4 vs. 73% in Q3. But, given the drop in overall purchase mix, this shouldn’t be much of a surprise. While MBA data isn’t totally reflective of performance for mortgage lenders in the community banking space, it is a sound barometer. 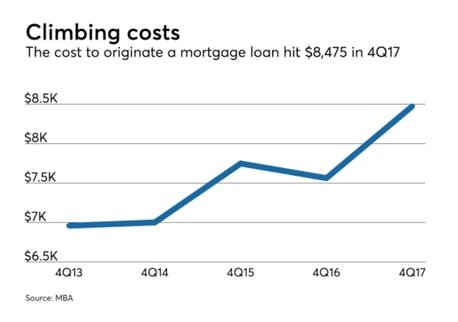 On the bright side, Freddie Mac just increased its refinance loan projections for 2018. This redirection echoes feedback from Cornerstone clients that the refinance market has remained a bit stronger than some had anticipated. However, even with the increase in refi volume, the 2018 projections are still lower than 2017 totals. 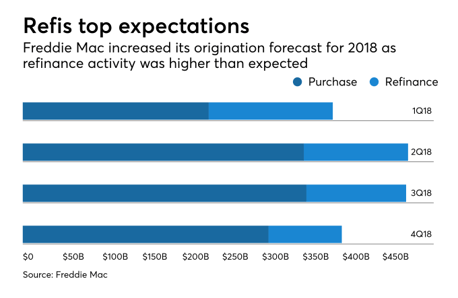 Personnel costs jumped even though both total production volume and mix of purchase loans were lower, moving from $5,237 in Q3 to $5,560 in Q4. These numbers continue to highlight an underlying problem where lenders must figure out how to generate loans with less staff using a less expensive model that is more scalable when volumes drop. Too many banks are relying on flat compensation costs without differentiation in compensation-based lead source and fixed staff are not organized to support the inevitable ebbs and flows in volume.

Fixed staff costs and loan officer compensation have been a thorn for many mortgage lenders. Loan origination costs are very high and a huge issue for some lenders right now, but that’s a topic for a different day. With purchase loans being more difficult and expensive to pull-through, it dials up personnel expenses on the fixed staff cost side of the equation. We’ve seen this in our Cornerstone Performance Report data where the median number of funded loans per total mortgage FTE/mo. has dropped from 3.55 in 2012 to just over 2 in 2017.

Sure, we had this thing called TRID that took place in that span of time. But, so long as the market gives us rising rates with flat-lined growth projections and purchase heavy volume, we need to take these numbers to heart and ensure that processes are efficient, electronic channels are providing value-add automation, and ensure compensation models allow for a lower cost of origination.